A trip to Shanghai and Guilin Scenic area

The Bund & Lujiazui in Shanghai 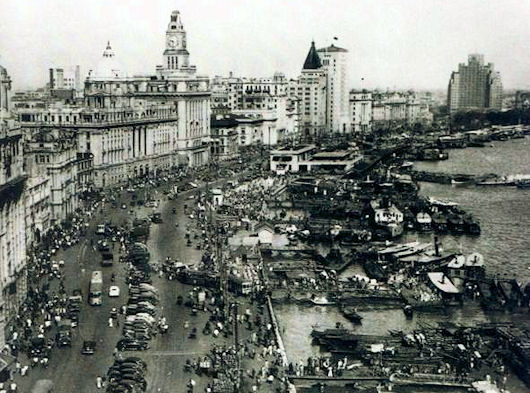 The Bund is a waterfront area in central Shanghai, it runs along the western bank of the Huangpu River, facing Pudong, a new disctrict of a finantial zone in Shanghai called “Lujiazui”. The word “bund” means an embankment, the Bund and Lujiazui at both sides of Huangpu River are the most attractive tourist destinations in Shanghai.

The Shanghai Bund has dozens of historical buildings that once housed numerous banks and trading houses from the United Kingdom, France, the United States, Italy, Russia, Germany, Japan, the Netherlands and Belgium.

The Shanghai Tower is a super-tall skyscraper (632 meters), the tallest of a group of three adjacent super-tall buildings in Pudong district, the other two are: the Jin Mao Tower and the Shanghai World Financial Center. You can see one of the photos with three skyscrapers next to each other on the slideshow.

The Moller Villa in Shanghai 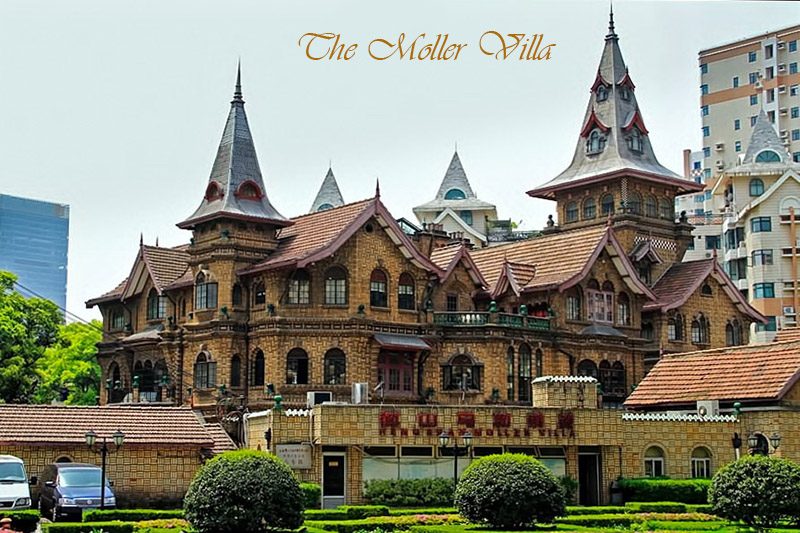 The Moller Villa located at South Shanxi Road in the French Concession area of Shanghai, China, is a colonial-era mansion. The villa was built by Eric Moller, a Swedish shipping magnate, designed by a famous architecture bureau “The Allied Architects”. It lasted nine years, completed in 1936. The villa is a three-story Norwegian-style building and looks like a fairy tale castle. See more photos in slides above.

Background story: The villa was designed according a dream story of Mahler’s daughter. One night the little girl had a dream, a big house and garden in fairy tale. Her father Mahler realized her daughter’s dream later by building this Norwegian-style villa.

In 2001, the Hengshan Group began to renovate the villa, preserving its original architectural style. The building now houses a hotel and restaurant. 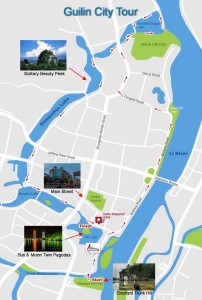 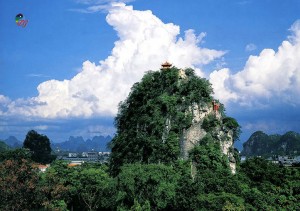 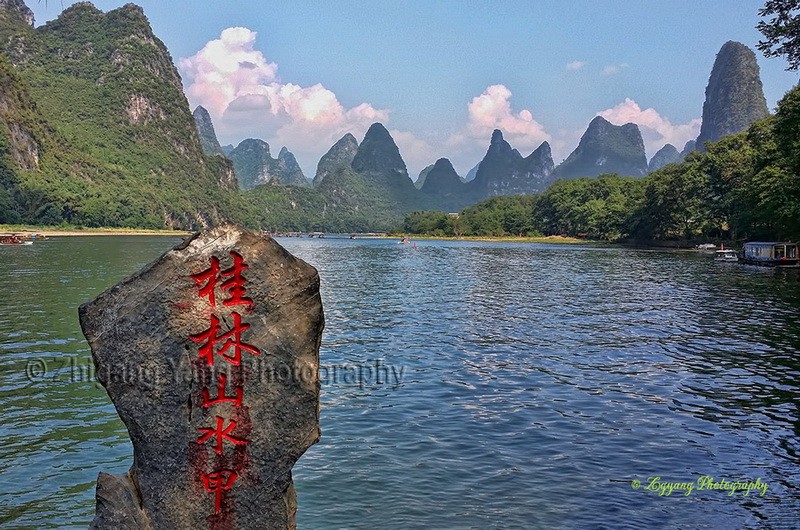 Guilin’s mountain and water scenery is the best under heaven

The Li River or Lijiang is a river in Guangxi Zhuang Autonomous Region, China. It ranges 83 kilometers from Guilin to Yangshuo, where the Karst mountain and river sights highlight the famous Li River cruise. Second photo on the left shows the popular Chinese saying carved in stone “Guilin shanshui jia tian xia” means ‘Guilin’s mountain and water scenery is the best under heaven’. 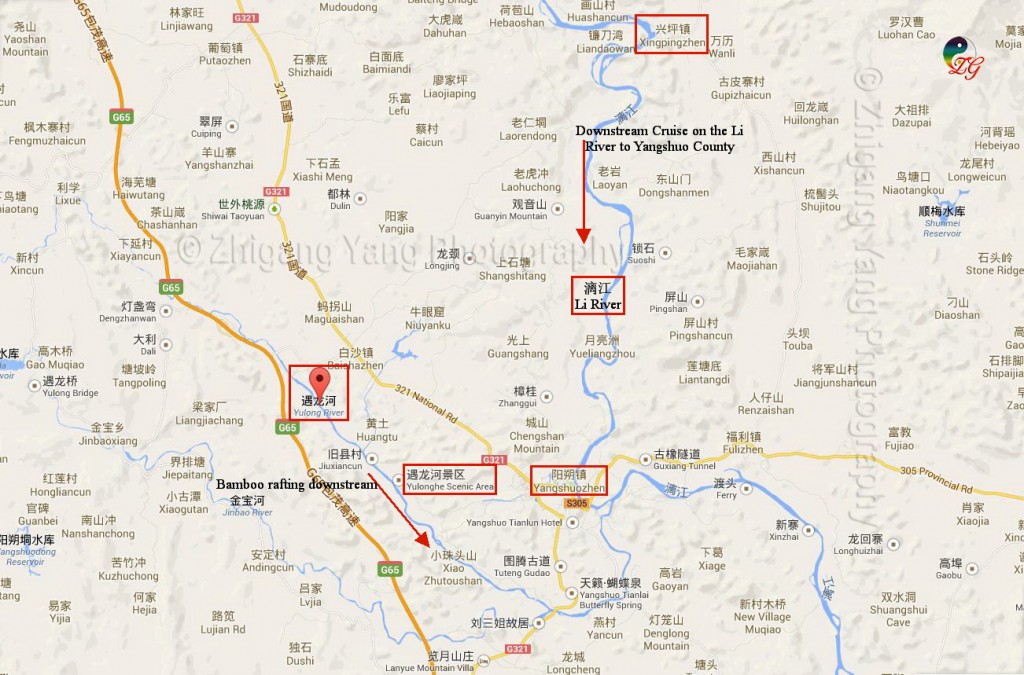 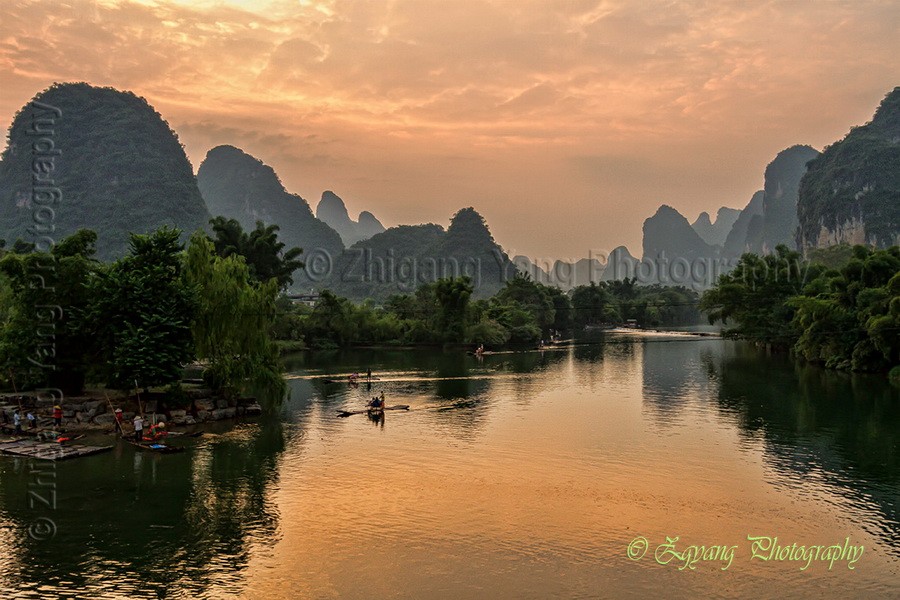 The Yulong River is a small tributary of the larger Li River, “Yulong” means “Meeting Dragon” It winds its way through some of most stunning limestone hills, peaceful villages and the 600 year-old Yulong stone bridge. The Yulong starts in Northern Yangshuo County near Litang and runs for over 35 kilometres through small villages of the Yulong River Valley.

Along the Yulong river, you can take a two and half hour bamboo rafting, or hiking and cycling along the banks, in the summer, swimming on Yulong River  is safe and enjoyable than on the Li River.

Silver Cave is the typical karst landscape, running through 12 hills. The cave is a floor-type cave, with three layers and more than ten scenery spots and different typles of stalactites, which are crystal clear and sparkling like silver, thus providing the area with its common name, one of the most famous scenic spots called “Music Stone Screen”. 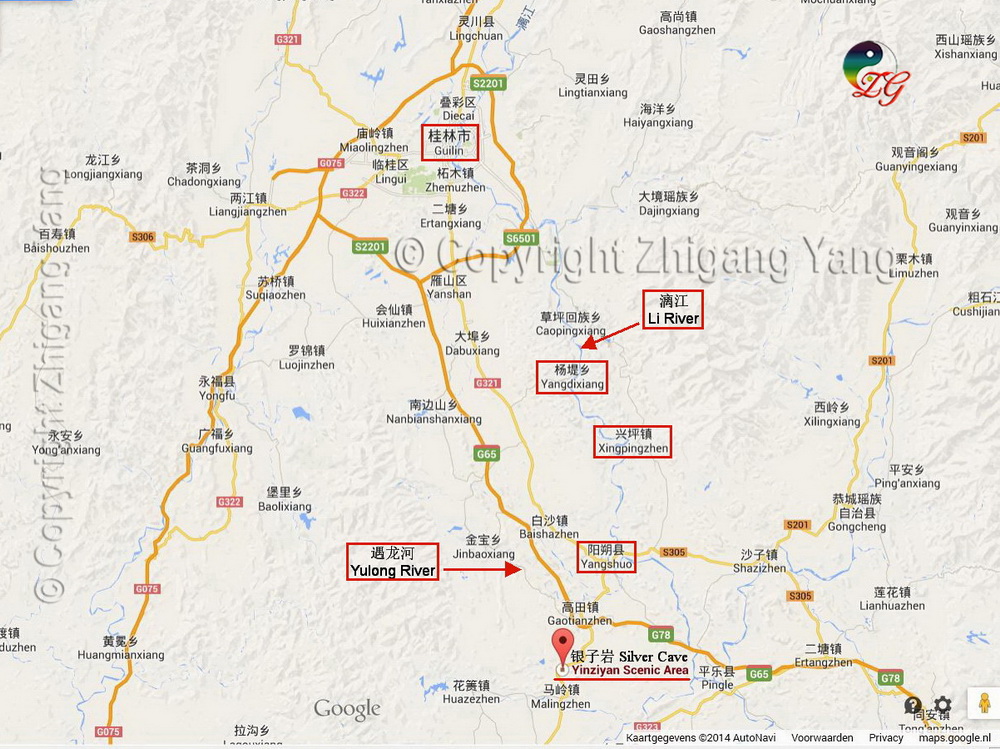 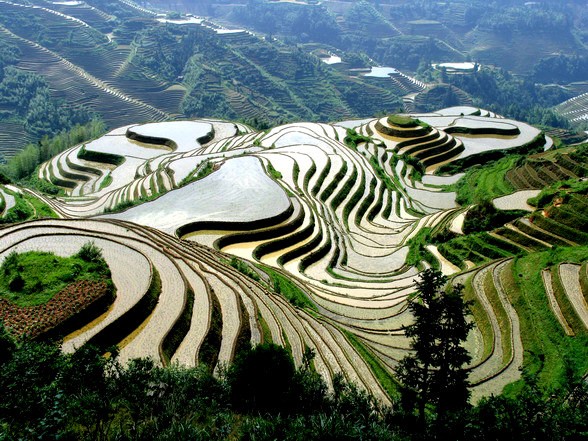 In spring, the water is irrigated into the fields and the terraces 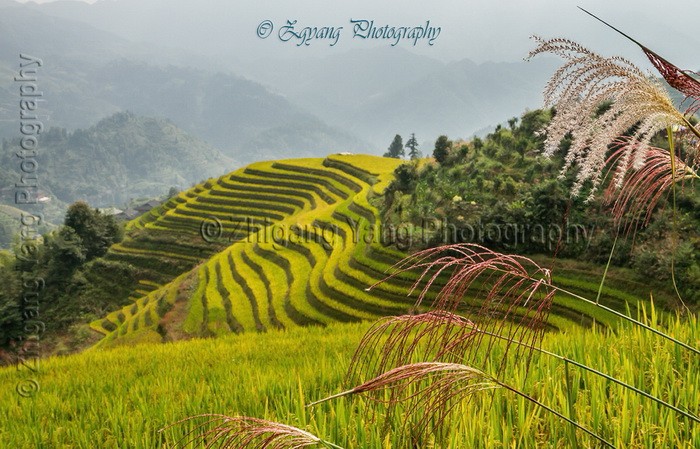 The terraced fields are built along the slope winding from the riverside up to the mountain top, between 600 m to 800 m above sea level. A coiling terrace line that starts from the mountain foot up to the mountain top divides the mountain into layers of water in spring, layers of green rice shoots in summer, layers of rice in fall, and layers of frost in winter. The Terraces were first built in the Yuan Dynasty (1271–1368) and were completed in the Qing Dynasty (1644–1911) by local people Zhuang and Yao. The Longji rice terraces are the culmination of both the profound wisdom and strenuous labor of the Zhuang people.

In early June, water is pumped over the rice paddies and young plants are transferred to the main terraces. During harvest season in autumn, the mountainsides are decorated with the gold of ripened rice. It’s a good opportunity for photography enthusiasts to shoot beautiful pictures of the rice terraces. 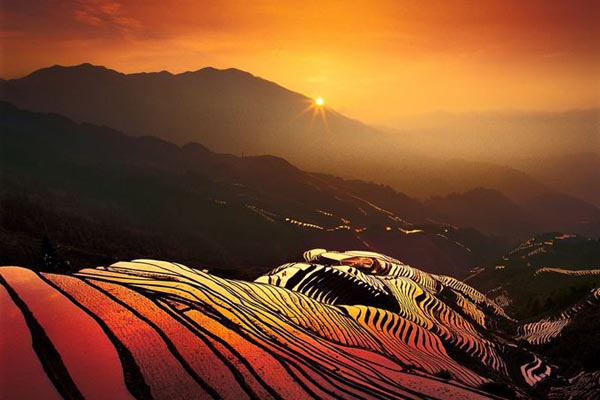